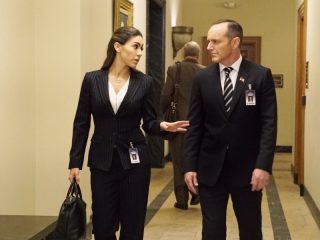 Agent May struggles to free herself from captivity but must get past Aida, who is struggling to see much value in May’s life. Daisy is summoned to answer for her actions while “undercover,” putting S.H.I.E.L.D. in the cross-hairs of Senator Nadeer. Meanwhile, Mack’s personal life threatens to come between him and Elena.

AGENT MAY'S SECRET WILL DESTROY THE TEAM, ON ABC'S 'MARVEL'S AGENTS OF S.H.I.E.L.D.'