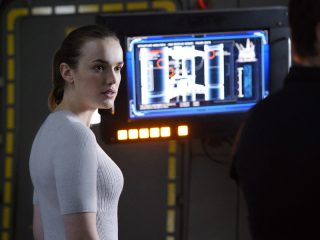 Coulson and May find themselves trapped behind enemy lines after awakening from the Framework, while Daisy, Simmons, and the airborne S.H.I.E.L.D. team must stay alive long enough to come to their aid. Elsewhere, “Ophelia” tries to convince Fitz that she has been acting in his best interest.

COULSON'S VICTORY IN THE FRAMEWORK REVEALS A GREATER THREAT, ON ABC'S 'MARVEL'S AGENTS OF S.H.I.E.L.D.'

"The Return" - In the exciting penultimate episode leading into next week's season finale, Coulson and the team's victory in the Framework is short-lived, as an even deadlier enemy looms against them all, on "Marvel's Agents of S.H.I.E.L.D.," TUESDAY, MAY 9 (10:00-11:00 p.m. EDT), on The ABC Television Network.

"The Return" was written by Maurissa Tancharoen & Jed Whedon and directed by Kevin Tancharoen.