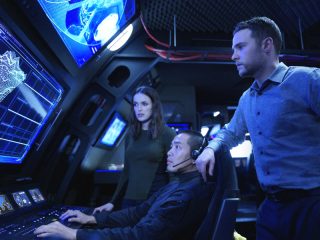 Written By:
Paul Zbyszewski
Directed By:
Kevin Tancharoen
Our Rating:

S.H.I.E.L.D. rallies its biggest assets in the hunt for Eli Morrow, who is building a powerful weapon that threatens all of Los Angeles. While Robbie confronts his uncle directly, Director Mace decides what to do with Dr. Radcliffe’s newest invention.

"The Laws of Inferno Dynamics" - S.H.I.E.L.D. and Ghost Rider find themselves unlikely allies when the lives of all of Los Angeles hang in the balance, on the winter finale of "Marvel's Agents of S.H.I.E.L.D.," TUESDAY, DECEMBER 6 (10:00-11:00 p.m. EST), on the ABC Television Network.