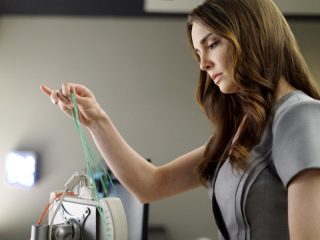 Written By:
Craig Titley
Directed By:
Magnus Martens
Our Rating:

Coulson, Fitz, and Mack track a rogue group that wants to give Inhumans a bad name, forcing the new Director to take S.H.I.E.L.D. public sooner than planned. Simmons and Dr. Radcliffe desperately search for a way to save May’s life.

AGENT MAY'S LIFE HANGS IN THE BALANCE, ON 'MARVEL'S AGENTS OF S.H.I.E.L.D.'

"Uprising" - As Coulson, Mack and Fitz attempt to track down and neutralize a rogue group looking to end Inhuman Registration worldwide, Simmons and Dr. Radcliffe only have hours to save May before she succumbs forever to her mysterious illness, on "Marvel's Agents of S.H.I.E.L.D.," TUESDAY, OCTOBER 11 (10:00-11:00 p.m. EDT), on the ABC Television Network.