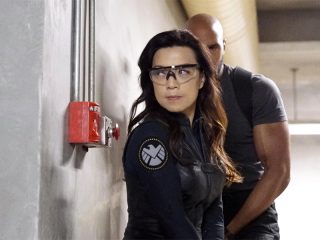 Written By:
DJ Doyle
Directed By:
Jesse Bochco
Our Rating:

May and Mack try to decide what to do next following Eli’s actions and the loss of half their team — while Coulson, Fitz, and Robbie find themselves trapped in between dimensions. Elsewhere, Agents Simmons is called in to consult on a mysterious figure who has been inside a Terragenesis cocoon for months.

"Deals With Our Devils" - With the loss of half the team, the remaining members search for answers as the clock counts down for Ghost Rider, on "Marvel's Agents of S.H.I.E.L.D.," TUESDAY, NOVEMBER 29 (10:00-11:00 p.m. EST), on the ABC Television Network.