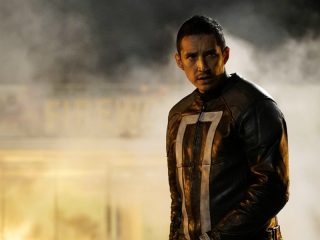 Written By:
Matt Owens
Directed By:
Brad Turner
Our Rating:

Daisy appeals to Simmons for help tracking down Inhumans being targeted by the Watchdogs, while Coulson and Mack get a rare opportunity to chase down Ghost Rider. Radcliffe decides to test his new project by putting her in charge of Agent May’s recovery care.

"Let Me Stand Next to Your Fire" - As Ghost Rider's quest for vengeance brings him into an explosive confrontation with S.H.I.E.L.D., Coulson and Mack must rely on an unlikely ally in their time of desperate need; and Daisy reunites with a familiar face to stop the Watchdogs, on "Marvel's Agents of S.H.I.E.L.D.," TUESDAY, OCTOBER 18 (10:00-11:00 p.m. EDT), on the ABC Television Network.