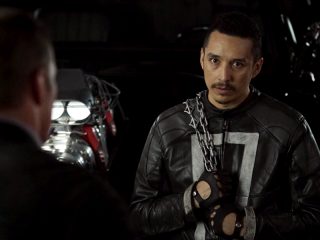 Written By:
Jeffrey Bell
Directed By:
Billy Gierhart
Our Rating:

The S.H.I.E.L.D. team gains a powerful weapon against Aida when Ghost Rider returns, seeking to take the Darkhold out of our realm. As the agents fight against Aida’s many Inhuman powers, Yo-Yo enters the Framework on a dangerous mission to rescue Mack before the virtual world collapses entirely.

GHOST RIDER RETURNS ON THE EXPLOSIVE SEASON FINALE OF 'MARVEL'S AGENTS OF S.H.I.E.L.D.,' ON ABC

"World's End" - With the surprising emergence of Ghost Rider, Coulson and the team attempt to stop Aida from ending the world on the exciting season finale of "Marvel's Agents of S.H.I.E.L.D.," TUESDAY, MAY 16 (10:00-11:00 p.m. EDT), on The ABC Television Network.