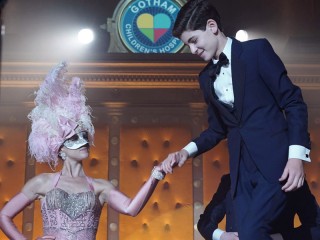 Written By:
John Stephens
Directed By:
Eagle Egilsson
Our Rating:

While Gordon and Bullock try to track down Jerome in the wake of a devastating attack, Alfred and Bruce attend a magic show at the Gotham Children’s Hospital gala — which turns into a hostage situation when Galavan initiates the next phase of his plan.

ABRACADABRA, HOSTAGES! ON AN ALL-NEW "GOTHAM" MONDAY, OCTOBER 5, ON FOX

Gordon and Bullock track down a nemesis from the past, leading to a standoff between Jerome (guest-star Cameron Monaghan) and Gordon. Meanwhile, a magic show at the Gotham Children's Hospital gala turns into a hostage situation in the all-new "Rise of the Villains: The Last Laugh" episode of GOTHAM airing Monday, Oct. 5 (8:00-9:00 PM ET/PT) on FOX. (GTH-203) (TV-14 L, V)