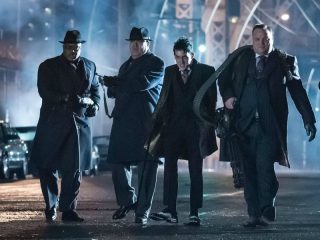 Written By:
Bruno Heller
Directed By:
Eagle Egilsson
Our Rating:

Having been replaced by a doppelganger Gordon finds himself trapped inside Indian Hill, along with Bruce and Lucius Fox, as Strange and his superiors plan for the facility’s total destruction. Fish uses her newfound power to make a play for freedom.

HUGO STRANGE'S PLANS UNRAVEL ON THE SEASON FINALE OF "GOTHAM" MONDAY, MAY 23, ON FOX

While Gordon, Bruce and Lucius remain at Indian Hill, the city of GOTHAM will be met with a new threat as Hugo Strange's inmates devise a plan to escape and start their new lives in GOTHAM in the all-new "Wrath of the Villains: Transference" season finale episode of GOTHAM airing Monday, May 23 (8:00-9:00 PM ET/PT) on FOX. (GTH-222) (TV-14 D, L, V)