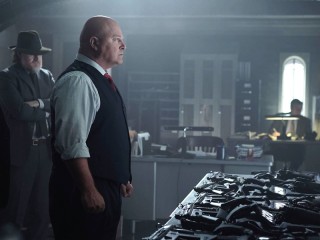 Written By:
Danny Cannon
Directed By:
TJ Scott
Our Rating:

A new police Captain arrives at the Gotham PD to clean house and form a new special task force, while Galavan attempts to bring Penguin in on his plan for Gotham’s future. Galavan introduces Bruce Wayne to a new friend, and Nygma asks Ms. Kringle to dinner.

A NEW CAPTAIN IS CALLED TO ACTION ON AN ALL-NEW "GOTHAM" MONDAY, OCTOBER 12, ON FOX

Captain Barnes (Michael Chiklis) is called to duty to create a law-abiding task force, with the help of Gordon. Meanwhile, Penguin gets caught up in a favor for Galavan, and Nygma asks Kringle out on a date in the all new "Rise of the Villains: Strike Force" episode of GOTHAM airing Monday, Oct. 12 (8:00-9:00 PM ET/PT) on FOX. (GTH-204) (TV-14 D, L, S, V)