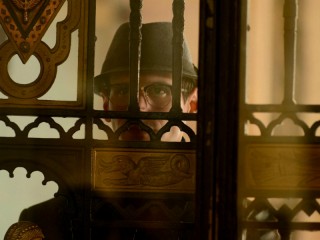 Written By:
Robert Hull
Directed By:
Nick Copus
Our Rating:

Gordon and Bullock investigate a museum heist that points to a train station bombing, unaware that the newest threat to the people of Gotham is someone close to them. An apparently reformed Penguin visits his old acquaintances, and Selina and Bruce attempt to steal some cash. Meanwhile, Jim learns that the investigation into Galavan’s murder has been re-opened.

PENGUIN MEETS HIS FATHER ON AN ALL-NEW "GOTHAM" MONDAY, MARCH 21, ON FOX

Gordon and Bullock investigate a trail of clues left in a museum robbery, which, unbeknownst to them, were left by Nygma in a dangerous game of cat-and-mouse. Meanwhile, Gordon's past comes back to haunt him when an anonymous person threatens to expose his hand in Galavan's murder. Also, Penguin's visit to some old friends leads him to meet his father, Elijah Van Dalh (guest star Paul Reubens), and Bruce practices his street smarts in the all-new "Wrath of the Villains: Mad Grey Dawn" episode of GOTHAM airing Monday, March 21 (8:00-9:01 PM ET/PT) on FOX. (GTH-215) (TV-14 L, V)