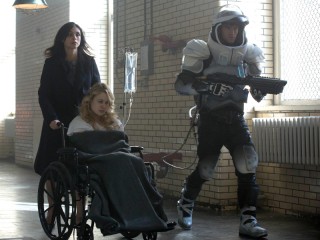 Written By:
Seth Boston
Directed By:
Eagle Egilsson
Our Rating:

The GCPD takes Victor Fries’ wife Nora to Arkham in a ploy to lure him in, but cannot prepare themselves for the fury of his onslaught. With new intel on the man he believes killed his parents Bruce must decide what sort of man he is going to become, and Penguin struggles under Hugo Strange’s “treatment.”

As Gordon, Bullock and Barnes continue the search for Victor Fries (guest star Nathan Darrow), they are forced to look to his wife, Nora (guest-star Kristen Hager), for help. Meanwhile, Penguin is introduced to Hugo Strange (guest star BD Wong), and Alfred reveals some crucial information to Bruce about his parents' murderer in the all-new "Rise of the Villains: A Dead Man Feels No Cold" episode of GOTHAM airing Monday, March 7 (8:00-9:01 PM ET/PT) on FOX. (GTH-213) (TV-14 L, V)