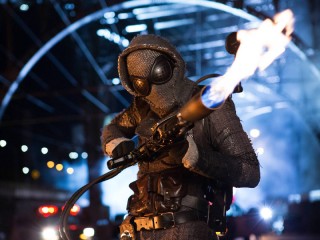 Selina tries to help her friend Bridgit get out of town, only to see her brothers reassert their control over the Firefly. Meanwhile Butch tries to infiltrate Galavan’s organization, and Nygma and Miss Kringle take their relationship to the next level — leading to unexpected consequences.

THE CITY GETS FIRED UP ON AN ALL-NEW "GOTHAM" MONDAY, OCTOBER 26, ON FOX

After Bridgit Pike (guest star Michelle Veintimilla) rejoins her brothers, a new spark of courage ignites within her, as she chooses to take control of her future. Meanwhile, Kringle and Nygma's relationship will take a new step and Penguin and Galavan continue to battle for control of Gotham City's underworld in the all new "Rise of the Villains: By Fire" episode of GOTHAM airing Monday, Oct. 26 (8:00-9:00 PM ET/PT) on FOX. (GTH-206) (TV-14 D, L, S, V)