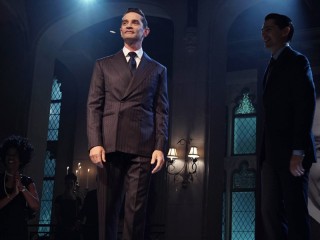 Written By:
Robert Hull
Directed By:
Kenneth Fink
Our Rating:

After Oswald finds his captive mother he learns where Butch’s loyalties lie, as Galavan moves to use the police force against Penguin. Nygma discovers that his alter-ego has more pull than he thought after a body goes missing.

A NEW MAYOR WILL BRING NEW TERROR ON AN ALL-NEW "GOTHAM" MONDAY, NOVEMBER 2, ON FOX

Butch leads Penguin and his men to the warehouse where Gertrude is being held, as Penguin plots his revenge on Galavan for kidnapping his mother. Meanwhile, Nygma deals with the aftermath of a deadly accident in the all new "Rise of the Villains: Mommy's Little Monster" episode of GOTHAM airing Monday, Nov. 2 (8:00-9:00 PM ET/PT) on FOX. (GTH-207) (TV-14 D, L, V)