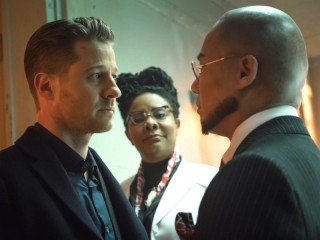 Written By:
Danny Cannon
Directed By:
Paul Edwards
Our Rating:

Jim and Harvey confront Dr. Strange about Azrael, who is on the loose in the city with a rekindled mission to kill Bruce Wayne. While Alfred tries to protect his charge from the assassin, Selina Kyle infiltrates Arkham to try and rescue a friend.

AZRAEL RUNS FREE ON AN ALL-NEW "GOTHAM" MONDAY, MAY 9, ON FOX

Azrael is on the loose in Gotham City, which sparks Penguin's need for revenge. Meanwhile, Bruce enlists the help of Selina Kyle to help track down Professor Strange, as he evades arrest for his experiments in the all-new "Wrath of the Villains: Unleashed" episode of GOTHAM airing Monday, May 9 (8:00-9:00 PM ET/PT) on FOX. (GTH-220) (TV-14 D, L, V)