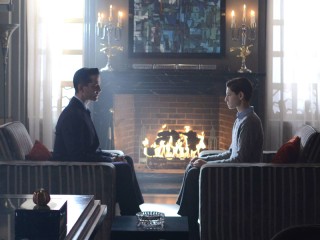 Written By:
Jim Barnes
Directed By:
Jeffrey Hunt
Our Rating:

Barbara turns herself in to the GCPD as part of a plot to lure Jim Gordon into a trap, while Galavan makes an emotional appeal to buy Bruce’s share in Wayne Enterprises. Nygma takes a trip into the woods.

GALAVAN SENDS BARBARA OUT FOR REVENGE ON AN ALL-NEW "GOTHAM" MONDAY, NOVEMBER 9, ON FOX

Galavan sends Barbara after Jim Gordon, while he tries to make a business deal with Bruce Wayne. Barnes and Bullock are hot on Barbara's trail, and Nygma has a run-in with a familiar face in the all new "Rise of the Villains: Tonight's the Night" episode of GOTHAM airing Monday, Nov. 9 (8:00-9:00 PM ET/PT) on FOX. (GTH-208) (TV-14 L, V)