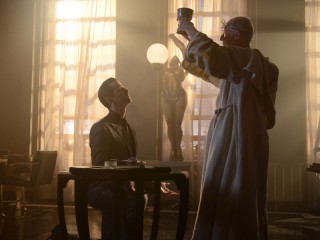 Written By:
Jordan Harper
Directed By:
Bill Eagles
Our Rating:

Penguin is pushed to recruit a dangerous family to conduct a series of arsons, leading him to a revelation about Galavan and his true agenda in Gotham. Barnes’ task force continues to put the squeeze on Penguin’s operation.

FAMILY RIVALRIES WILL RESURFACE IN THE CITY ON AN ALL-NEW "GOTHAM" MONDAY, OCTOBER 19, ON FOX

Galavan and Penguin join forces with a dangerous family in Gotham. Then, as the rivalry between the Waynes and the Galavans resurfaces, Gordon struggles to maintain order in the city in the all new "Rise of the Villains: Scarification" episode of GOTHAM airing Monday, Oct. 19 (8:00-9:00 PM ET/PT) on FOX. (GTH-205) (TV-14 D, L, V)