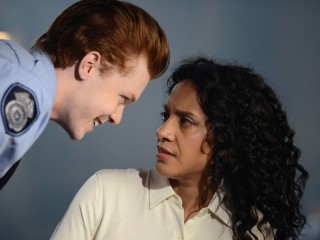 Written By:
Ken Woodruff
Directed By:
Rob Bailey
Our Rating:

While Galavan torments the Mayor of Gotham, the criminally insane Jerome leads a team of escapees from Arkham in a plan to strike terror in the heart of the city. Bruce and Alfred clash over how to move forward, and Gordon asks Harvey Bullock to come back to the GCPD.

A DEADLY ESCAPE ROCKS THE CITY ON AN ALL-NEW "GOTHAM" MONDAY, SEPTEMBER 28, ON FOX

Following his reinstatement, Gordon is thrust onto the high-profile case tracking the deadly inmate escape from Arkham Asylum. Meanwhile, Galavan plans his next move, while Bruce enlists the help of his father's old friend to unlock the secrets in his office, and Nygma attempts to ask out Kristin Kringle (guest star Chelsea Spack) on a date in the all-new "Rise of the Villains: Knock, Knock," episode of GOTHAM airing Monday, Sept. 28 (8:00-9:00 PM ET/PT) on FOX. (GTH-202) (TV-14 L, V)