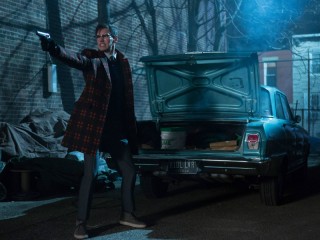 Gordon’s quest to clear his name puts him on the trail of the real killer, prompting him to turn to Edward Nygma for help. Oswald makes a discovery about his father’s true fate, leading to a confrontation with his new “family.”

GORDON DISCOVERS A CLUE, WHILE PENGUIN HAS A CHANGE OF HEART ON AN ALL-NEW "GOTHAM" MONDAY, APRIL 11, ON FOX

In an attempt to clear his name, Gordon steals his case file and approaches Nygma for help. Meanwhile, Penguin discovers his step-family's role in his father's death, and awakens from his conditioning in the all-new "Wrath of the Villains: Into the Woods" episode of GOTHAM airing Monday, April 11 (8:00-9:01 PM ET/PT) on FOX. (GTH-217) (TV-14 L, S, V)