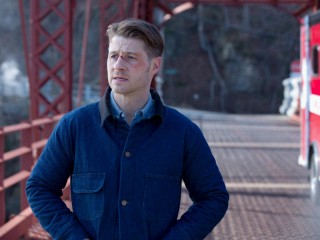 Written By:
Danny Cannon
Directed By:
Scott White
Our Rating:

Jim faces a difficult prison sentence, with the city’s criminals and even the warden gunning for him. Elsewhere, Oswald struggles with his personal demons as he gets to know his father better — while his new family plots against him.

GORDON FACES NEW THREATS, AND PENGUIN LEARNS MORE ABOUT HIS FAMILY ON AN ALL-NEW "GOTHAM" MONDAY, MARCH 28, ON FOX

After Gordon is removed from protective custody, he begins to face new threats and dangers inside prison walls. In order to survive, he must rely on a new friend, as well as Bullock and other outside help. Meanwhile, Penguin grows closer to his father, while his step-mother and step-siblings move forward with their own plans for the family in the all-new "Wrath of the Villains: Prisoners" episode of GOTHAM airing Monday, March 28 (8:00-9:01 PM ET/PT) on FOX. (GTH-216) (TV-14 D, L, S, V)