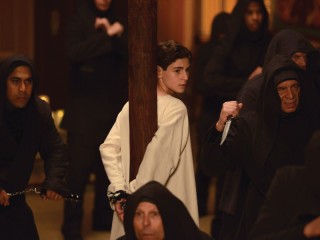 Written By:
Bruno Heller
Directed By:
Jeffrey Hunt
Our Rating:

As the Order of St. Dumas is poised to kill Bruce Wayne in a ritual sacrifice, Penguin appeals to Jim for an alliance against their common enemy. Meanwhile Alfred fights to stay alive, and Silver is given one final task to prove herself to the family.

WHO WILL SAVE THE SON OF GOTHAM ON THE FALL FINALE OF "GOTHAM" MONDAY, NOVEMBER 30, ON FOX

All-New Episodes of GOTHAM Return in 2016!

When Bruce Wayne is kidnapped, Gordon must look to some unlikely and dangerous allies for help. It is a battle of the villains, and not everyone makes it out alive in the all new "Rise of the Villains: "Worse Than A Crime" fall finale episode of GOTHAM airing Monday, Nov. 30 (8:00-9:00 PM ET/PT) on FOX. (GTH-211) (TV-14 L, V)