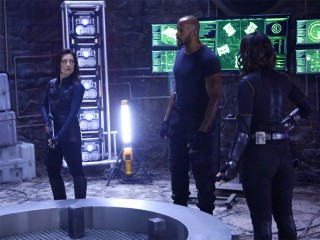 Written By:
Jeffrey Bell
Directed By:
Vincent Misiano
Our Rating:

S.H.I.E.L.D. attempts to seize control of the ancient portal, while Ward leads a Hydra team to the alien world to retrieve the creature living on the other side — where Fitz also makes contact with a potential ally.

COULSON REACHES HIS BREAKING POINT, IN THE EPIC WINTER FINALE OF "MARVEL'S AGENTS OF S.H.I.E.L.D." ON ABC

"Maveth" - S.H.I.E.L.D. and Hydra go head-to-head in a battle that will change Coulson's world forever. While Daisy and her team of Inhumans fight to keep Hydra at bay, Coulson and Fitz take the ultimate risk, in the epic winter finale of "Marvel's Agents of S.H.I.E.L.D.," TUESDAY, DECEMBER 8 (9:00-10:00 p.m., ET) on the ABC Television Network.