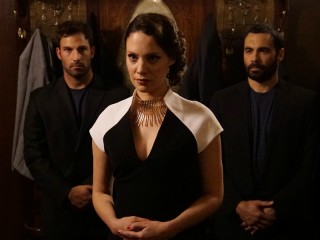 Written By:
Lauren LeFranc
Directed By:
Garry A. Brown
Our Rating:

Having lost one of their own to Hive’s control, the team races to stop the enemy from adding more Inhumans to their ranks. Agents Fitz and Simmons go undercover to make contact with a transhumanist who could help them counteract Hive’s control.

"The Singularity" - The S.H.I.E.L.D. team is left reeling and decimated as Hive continues to sway Inhumans to his side. But there is a sliver of hope as Agents Fitz and Simmons follow a lead that may be able to stop the maniacal Inhuman once and for all, on "Marvel's Agents of S.H.I.E.L.D.," TUESDAY, APRIL 26 (9:00-10:00 p.m. EDT) on the ABC Television Network.