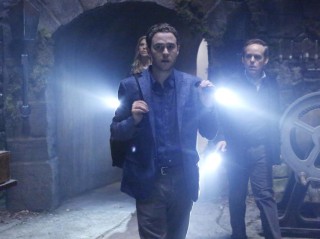 Written By:
DJ Doyle
Directed By:
Kevin Tancharoen
Our Rating:

Colson’s team enlist the help of an Asgardian to unlock the ancient monolith, which Fitz is convinced is a gateway that sent Simmons to another world. May reconnects with her father as she considers her future with S.H.I.E.L.D., and Ward seeks to recruit the wealthy son of a former Hydra operative.

THE ANCIENT SECRETS OF THE MONOLITH ARE REVEALED, ON "MARVEL'S AGENTS OF S.H.I.E.L.D."

"Purpose in the Machine" - Fitz and the team enlist the aid of an Asgardian to unlock the secrets of the ancient monolith that swallowed Simmons, and Agent May is at a crossroads in her personal and professional life, on "Marvel's Agents of S.H.I.E.L.D.," TUESDAY, OCTOBER 6 (9:00-10:00 p.m., ET) on the ABC Television Network.