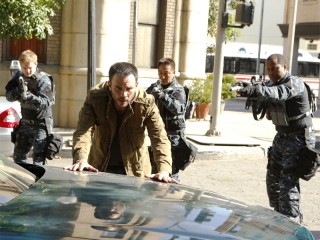 Daisy leads the team in extracting a new Inhuman from Seattle, but soon decides she will need help acclimating the Inhumans to their new lives. Coulson tracks the leader of another organization that is searching for powered people, and Fitz goes to great lengths on a last-ditch effort to find Jemma.

COULSON FACES A SURPRISING NEW RIVAL, ON THE SEASON PREMIERE OF "MARVEL'S AGENTS OF S.H.I.E.L.D." ON ABC

"Marvel's Agents of S.H.I.E.L.D." returns for an action-packed third season on TUESDAY, SEPTEMBER 29 (9:00-10:00 p.m., ET) on the ABC Television Network, with Director Phil Coulson (Clark Gregg) and Agent Daisy Johnson (Chloe Bennet) leading the charge as S.H.I.E.L.D. searches the world for more powered people in the aftermath of their epic battle with Jiaying and her army of Inhumans. However, Coulson and the team soon find out that they are not the only group looking for these new Inhumans.

On the season premiere episode, "Laws of Nature," when Coulson and the team discover a new Inhuman, S.H.I.E.L.D. comes face to face with another organization searching for powered people. And still reeling from Simmons' dramatic disappearance, Fitz goes to extreme lengths to try to learn how to get her back.