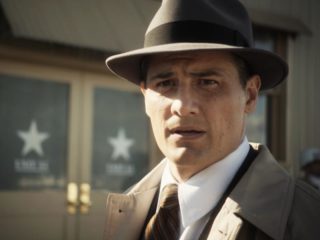 The Zephyr jumps forward to New Mexico in the 1950s, where the Chronicoms have targeted a top-secret weapons project at Area 51. Simmons poses as Peggy Carter, only to come face-to-face with the S.H.I.E.L.D. agent’s former partner.

SPACE ISN'T THE ONLY THING WORTH RACING FOR ON AN ALL-NEW EPISODE OF ABC'S 'MARVEL'S AGENTS OF S.H.I.E.L.D.,' WEDNESDAY, JUNE 10

"Alien Commies from the Future!" - A surprise leap forward in time has stranded Enoch in 1931 and landed the team in yet another unfamiliar decade. Now, in order to stop the chronicoms from launching their newest future-dismantling plan, the agents will have to infiltrate one of S.H.I.E.L.D.'s most secure bases. They won't be able to succeed without help from a familiar face or two on an all-new episode of "Marvel's Agents of S.H.I.E.L.D." airing WEDNESDAY, JUNE 10 (10:00 - 11:00 p.m. EDT), on ABC. Episodes can also be viewed the next day on demand and on Hulu.

"Alien Commies from the Future!" was written by Nora Zuckerman & Lilla Zuckerman and directed by Nina Lopez-Corrado.