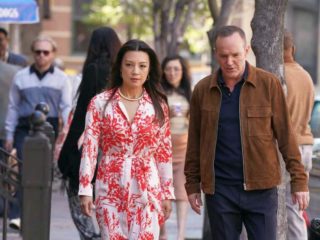 Written By:
Iden Baghdadchi
Directed By:
Stan Brooks
Our Rating:

After arriving in 1970s New York the agents discover that Wilfred Malick is in league with the Chronicoms, plotting to use the launch of S.H.I.E.L.D.’s Project Insight to target future heroes.

"A Trout in the Milk" - After a bumpy landing in the disco decade, the team - Daniel Sousa in tow - reunites with more than one familiar face at the S.H.I.E.L.D. hangout and discovers exactly how to dismantle the Chronicoms' latest plan. But when they get too close for comfort, the Zephyr unexpectedly leaps forward again, this time to a date pivotal to not only the future of S.H.I.E.L.D. but to the future of Director Mack as well on "Marvel's Agents of S.H.I.E.L.D.," airing WEDNESDAY, JUNE 24 (10:00-11:00 p.m. EDT), on ABC. (TV-14, V) Episodes can also be viewed the next day on demand and on Hulu.

"A Trout in the Milk" was written by Iden Baghdadchi and directed by Stan Brooks.