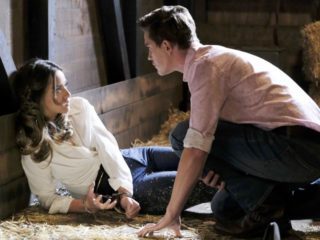 Written By:
DJ Doyle
Directed By:
Aprill Winney
Our Rating:

When the Chronicoms improve their replacement technology Coulon and May track them to their ship, while Mack and Yo-Yo try to help his parents escape the facility. As Jemma struggles to repair the Zephyr, Daisy and Sousa are held captive by an ambitious and power-hungry Nathaniel Malick.

TIME TO MEET THE PARENTS ON AN ALL-NEW EPISODE OF 'MARVEL'S AGENTS OF S.H.I.E.L.D.,' WEDNESDAY, JULY 1

"Adapt or Die" - The stakes are higher than ever when, after blowing their cover and damaging the Zephyr in the process, the team must scramble to rescue Mack's parents, save S.H.I.E.L.D. from a chronicom infestation, and fix the ship ... all before the next time-jump. Meanwhile, Daisy and Sousa find themselves at a disadvantage against a power hungry Nathaniel Malick and his goons, and Coulson will have to do the thing he does best in order to save the future, on "Marvel's Agents of S.H.I.E.L.D.," airing WEDNESDAY, JULY 1 (10:00 - 11:00 p.m. EDT), on ABC. (TV-14, V) Episodes can also be viewed the next day on demand and on Hulu.

"Adapt or Die" was written by DJ Doyle and directed by Aprill Winney.