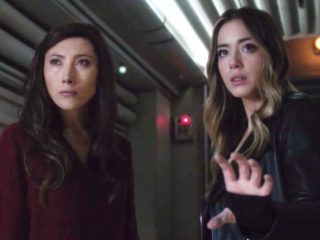 Nathaniel Malick recruits a young John Garrett into his ranks, taking control of Afterlife and forcing Jiaying on the run. As S.H.I.E.L.D. tries to get her daughter Kora back, Daisy considers revealing herself to her mother.

FAMILY IS A TRICKY THING, ON AN ALL-NEW EPISODE OF ABC'S 'MARVEL'S AGENTS OF S.H.I.E.L.D.,' WEDNESDAY, JULY 29

"Stolen" - After Enoch's sacrifice propelled them out of the time storm, the team arrives back in 1983 where Nathanial and Kora are hard at work building an army of hand-selected anarchist Inhumans at Afterlife. When the agents split up to cover more ground, Daisy is tasked with protecting Jiaying and is compelled to confront her mother for the first time since her death; while the others quickly learn they'll need to face yet another supercharged former enemy in order to stop Malick on "Marvel's Agents of S.H.I.E.L.D.," airing WEDNESDAY, JULY 29 (10:00-11:00 p.m. EDT), on ABC. (TV-14, V) Episodes can also be viewed the next day on demand and on Hulu.

"Stolen" teleplay is by George Kitson & Mark Leitner, with story by Mark Linehan Bruner and directed by Garry A. Brown.