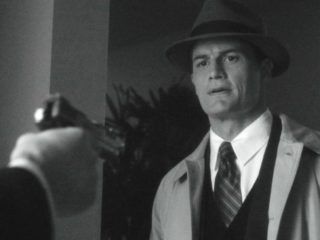 Written By:
Mark Leitner
Directed By:
Garry A. Brown
Our Rating:

In 1955 Coulson sets his mind to helping Agent Sousa make a vital delivery, knowing that history tells the story of Sousa’s heroic death. Meanwhile Deke comes face-to-face with Hydra’s most powerful, and May learns more about what has happened to her.

HISTORY COMES BACK TO HAUNT THE TEAM WHEN AN ALL-NEW EPISODE OF ABC'S 'MARVEL'S AGENTS OF S.H.I.E.L.D.' GOES NOIR, WEDNESDAY, JUNE 17

"Out of the Past" - It was just another average morning on July 22, 1955, when Agent Phil Coulson realized the importance of that day in the S.H.I.E.L.D. history books. With a chip on his shoulder and a genre-bending glitch in his system, he'd set into motion a chain of events that would hopefully preserve the timeline as we know it and ensure those pesky chronicoms get the ending they deserve. What could go wrong? To find out, tune in to "Marvel's Agents of S.H.I.E.L.D.," WEDNESDAY, JUNE 17 (10:00 - 11:00 p.m. EDT), on ABC. (TV-14, LV) Episodes can also be viewed the next day on demand and on Hulu.

"Out of The Past" was written by Mark Leitner and directed by Garry A. Brown.