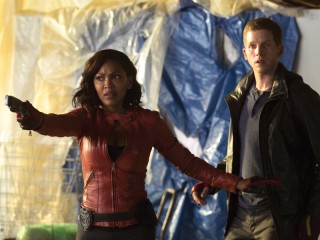 Written By:
Max Borenstein
Directed By:
Mark Mylod
Our Rating:

In the years following the end of the Precrime Department, the precog Dash arrives in Washington, D.C. with the hope of using his ability to glimpse the future to stop murders. When Dash sees the murder of a politician’s wife, he teams with Detective Lara Vega to stop it.

THE FUTURE IS COMING ON THE SERIES PREMIERE OF "MINORITY REPORT" MONDAY, SEPTEMBER 21, ON FOX

Based on the international blockbuster film by Steven Spielberg, MINORITY REPORT follows the unlikely partnership between a man haunted by the future and a cop haunted by her past, as they race to stop the worst crimes of the year 2065 before they happen. DASH (Stark Sands, "Inside Llewyn Davis") is a quiet, idealistic precog secretly living among society, who tries to use his ability to see future murders to save lives by teaming up with the brash, but shrewd, Detective LARA VEGA (Meagan Good, "Think Like A Man" franchise, "Californication") in the all-new "Pilot" series premiere episode of MINORITY REPORT airing Monday, Sept. 21 (9:00-10:00 PM ET/PT) on FOX. (REP-101) (TV-14 L, V)