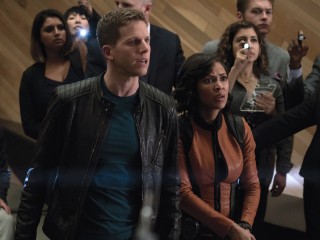 Vega and Dash attempt to stop the murder of a Senator who is advocating a cutting-edge genetic science. Arthur seeks to enlist Blake to work against the Defense Intelligence Agency when he learns they are on the precogs’ trail.

THE D.I.A. CIRCLES IN ON THE PRECOGS ON AN ALL-NEW "MINORITY REPORT" MONDAY, NOVEMBER 23, ON FOX

Blake withholds information from the Defense Intelligence Agency when he learns they are on the precogs' trail, and Arthur takes matters into his own hands to save them. Meanwhile, Dash gets a vision of a political assassination that intrudes into Vega's personal life in the all-new "Memento Mori" episode of MINORITY REPORT airing Monday, Nov. 23 (9:00-10:00 PM ET/PT) on FOX. (REP-109) (TV-14 D, L, V)