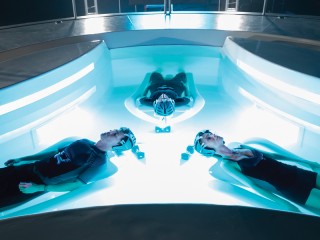 Plotting to restart Precrime, Blomfeld reveals that he has found Agatha, Arthur, and Dash — and found evidence showing Detective Vega has been working with them. Meanwhile, Vega and the precogs must thwart a wide-scale chemical attack by the terrorist group Memento Mori.

THE PRECOGS WILL RUN FROM THEIR PAST ON THE SEASON FINALE OF "MINORITY REPORT" MONDAY, NOVEMBER 30, ON FOX

The precogs and Vega must come together to thwart a chemical attack by Memento Mori, meanwhile Blomfeld (guest star Reed Diamond) is determined to get the precogs back in the milk bath in the all-new "Everybody Runs" season finale episode of MINORITY REPORT airing Monday, Nov. 30 (9:00-10:00 PM ET/PT) on FOX. (REP-110) (TV-14 D, L, V)