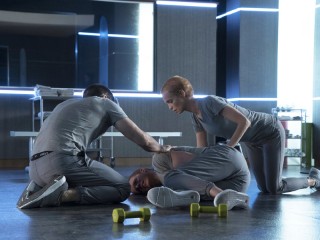 Dash investigates a mugging that ended in murder and finds himself held captive by a wealthy crime boss, forcing Arthur and Vega to work together to try and get him back. Meanwhile, Arthur remembers the days following their release from Precrime.

A SOLO MISSION PUTS DASH IN DANGER ON AN ALL-NEW "MINORITY REPORT" MONDAY, NOVEMBER 2, ON FOX

Dash endeavors to investigate a murder on his own, but when things don't go as planned, Vega is forced to reluctantly recruit Arthur and his underworld connections to help out Dash. Meanwhile, details of Agatha, Arthur and Dash's pasts are uncovered in the all-new "Honor Among Thieves" episode of MINORITY REPORT airing Monday, Nov. 2 (9:00-10:00 PM ET/PT) on FOX. (REP-106) (TV-14 L, V)