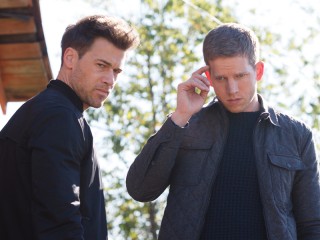 Written By:
Matt McGuinness
Directed By:
Nick Hurran
Our Rating:

Arthur and Dash return home to the isolated community on Fiddler’s Neck Island, where Vega hopes to help Agatha solve an impending murder case — the young daughter of a man from her past.

A COMMUNITY STUCK IN THE PAST IS FORCED TO CONFRONT THE FUTURE ON AN ALL-NEW "MINORITY REPORT" MONDAY, OCTOBER 26, ON FOX

Arthur and Dash team up to help a young girl in poor health whom they fear is the victim they see in their next vision. Although modern technology could save her, the community in which she lives prohibits the use of such equipment. When Vega and Agatha jump into the case, everyone must work together in the all-new "Fiddler's Neck" episode of MINORITY REPORT airing Monday, Oct. 26 (9:00-10:00 PM ET/PT) on FOX. (REP-107) (TV-14 L, V)