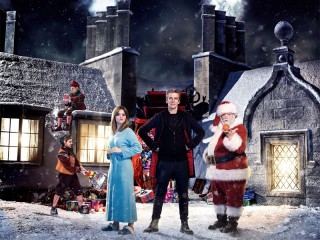 We’re less than two weeks away from the worldwide debut of the 2014 Doctor Who Christmas special, and that means it’s time for a new teaser video. Take a look below, courtesy of the BBC.

The episode reunites Peter Capaldi and Jenna Coleman, who encounter none other than Santa Claus himself (guest star Nick Frost … yes, his name is actually “Nick Frost”). Writer Steven Moffat promises a few scares, describing it as “Miracle on 34th Street meets Alien.”

Here’s how Doctor Who Magazine describes the episode, which picks up six months after Clara and the Doctor parted ways at the end of Season Eight:

Four crew members of an Ice Cap Polar Base — Ashley Carter, Bellows, Professor Albert and Shona — are under attack from the alien Kantrofarri. Fortunately for them, help is on the way. But desperate though their situation is, how willing will they be to accept one rescuer who arrives in a police box, and another who turns up on a sleigh pulled by flying reindeer?