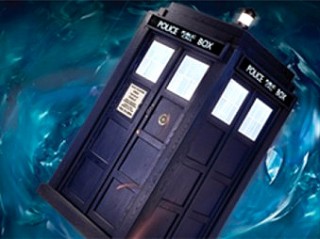 The Doctor is out … but only until the 50th anniversary special on November 23.

Saturday’s episode of Doctor Who ended the seventh (or is it the thirty-third?) season in style, and the BBC was poised and ready to announce the show’s renewal for Season Eight.

The U.K. broadcaster confirmed that the new season has been commissioned, with Brian Minchin joining Steven Moffat as an executive producer on the show.  His previous credits include Torchwood: Miracle Day, Being Human, and The Sarah Jane Adventures.

Matt Smith earlier confirmed that he’ll be back as the eleventh Doctor, as well.  Jenna-Louise Coleman is also expected to return for her first full season as Clara Oswald.

But before Season Eight kicks off next year … a celebration is in order!  Doctor Who turns 50 this year, and the BBC is celebrating with a number of specials.  An anniversary episode will air on November 23 (50 years to the day from the series’ 1963 premiere), and will see the tenth and eleventh Doctors team up for an incredible, 3D adventure in time and space.  David Tennant and Billie Piper (“Rose Tyler”) co-star with Smith and Coleman.

Also in the special are John Hurt (seen briefly at the end of this week’s finale, “The Name of the Doctor”), Jemma Redgrave, Joanna Page … and the Zygons!

Another special event, “An Adventure in Space and Time,” will air later this year.  It’s a behind-the-scenes dramatization of the creation of the Doctor Who television show in the early 1960s, penned by Who writer Mark Gatiss.

We’ll also get another Christmas special at the end of the year, and the BBC promises more 50th anniversary announcements.

For more on the show head over to SciFi Stream’s Doctor Who series guide!