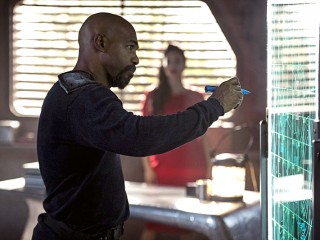 Written By:
Charlie Craig
Directed By:
Tim Scanlan
Our Rating:

Pike leads a massacre of a Grounder encampment that threatens to destroy the fragile peace, and Clarke infiltrates Arkadia to try and make things right. Meanwhile Jaha arrives in the settlement with a spiritual message, and Murphy and Emori make trouble on the road.