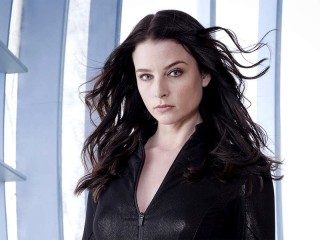 Syfy and Showcase’s Continuum is (finally) returning, and this week we have the first look at the show’s fourth and final season.

The 30-second spot below hints at what is to come in the shortened, 6-episode final season of the show. When Season Four left off a group of soldiers arrived from the future, threatening to turn upside-down everything that Kiera (Rachel Nichols) has been working for.

The trailer suggests that the soldiers themselves are working to reshape the future, as Kiera takes up a renewed focus on her own self-interests in trying to build a new future she can live in. But just how many alterations can the timeline take?

Continuum will premiere September 11, according to the spot.

The screen bug on the TV spot also indicates that Syfy will keep the show on Friday nights, where it has aired in previous seasons … but that it will bump the final episodes of Continuum out of prime time. The show is listed for the extra-late hour of 11 p.m. (10 o’clock Central time), though Syfy has made no official announcement and could change this.

Only a low-res version of the trailer is available so far. Syfy Channel and Showcase should release their official spots in HD in due course, so stay tuned for updates.