As if there was ever any doubt, today AMC made it official and renewed the highest-rated scripted drama on cable. The Walking Dead will shuffle back and demand our brains (and eyes) for a fifth season.

The announcement comes just three episodes into the U.S. broadcast of Season Four, which has smashed all previous records held by the show and set a new cable high, with 16.1 million tuning in live to the October 13 premiere. (That number was over 20 million after a few days of DVR viewings.)

How big is that number? After sliding 20 percent from the premiere (up against Game 4 of the World Series, as well as Sunday Night Football), ratings for last Sunday’s episode still came in higher than last year’s most-watched episode (12.9 million, over the 12.4 who watched the third season finale).

“We are very happy to make what has to be one of the most anti-climactic renewal announcements ever: The Walking Dead is renewed for a fifth season,” AMC President Charlie Collier said. “This is a show that has erased traditional distinctions between cable and broadcast. Its expanding base of passionate fans has grown every season, most recently — and most notably — with the season four premiere earlier this month, which broke viewership records for the series and became the biggest non-sports telecast in cable history. On behalf of the incredible team on both sides of the camera, thank you to the fans and here’s to more Dead.” 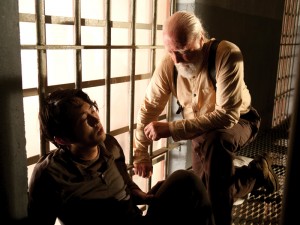 The Walking Dead not only rules cable: among adults 18 to 49 (they key demographic that advertisers prize most), it’s currently the highest rated scripted drama on television — topping even CBS’s monster hit procedurals NCIS, NCIS: Los Angeles, and others (whose viewers tend to skew older).

Scott Gimple will return as the series’ showrunner for Season Five, along with executive producers Robert Kirkman, Gale Anne Hurd, David Alpert, Greg Nicotero and Tom Luse. Just which actors will return … well, that entirely depends upon who survives the current year. (Eight episodes will air this fall, followed by another eight likely to begin in February.)

The network did not specify how many episodes it has ordered, but another 16-episode season seems likely. Season Five would premiere next fall.

AMC has also put into development a spin-off companion series (story), which would allow creator Robert Kirkman and the writers to step away from the basic framework of the comic book on which the show is based and tell stories around another group of people somewhere else in the zombie apocalypse.

The Walking Dead airs Sundays at 9/8c on AMC.