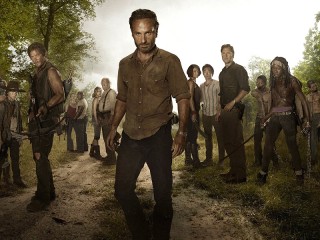 AMC is prepping a spin-off for The Walking Dead, its monster hit zombie apocalypse show. With the show among the highest-rated in cable history, the network calls the move “literally a no-brainer.”

Presuming it makes it to screen, the show will be set in another part of the same universe, with a different group of characters dealing with the global zombie pandemic. And don’t worry that the cable channel might be teeing up a replacement for an aging show: AMC is specifically calling this a “companion series.”

And The Walking Dead is still drawing record ratings.

Robert Kirkman, Gale Anne Hurd, and David Alpert are on board as executive producers. AMC hopes to have the show ready by 2015.

“We look forward to working with Robert, Gale, and Dave again as we develop an entirely new story and cast of characters,” AMC president Charlie Collier said in a press release. “It’s a big world and we can’t wait to give fans another unforgettable view of the zombie apocalypse.”

Kirkman, who created the comic and serves as an executive producer on the TV show, said that the new show will give him and the writers a much-wanted chance to stray from the leading narrative of the graphic novel — which just celebrated its tenth year.

“After 10 years of writing the comic book series and being so close to the debut of our fourth, and in my opinion, best season of the TV series, I couldn’t be more thrilled about getting the chance to create a new corner of The Walking Dead universe,” Kirkman said. “The opportunity to make a show that isn’t tethered by the events of the comic book, and is truly a blank page, has set my creativity racing.”

AMC said that the series is the number one show on television among adults 18 to 49. Last season premiered to 10.87 million viewers (Live + Same Day), and topped out with a series-record 12.42 million for the season finale in March.

The Walking Dead returns when Season Four starts on Sunday, October 13. Watch SciFi Stream’s series guide to keep up with the show!