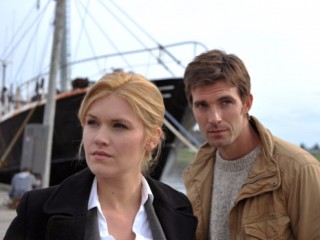 Syfy Channel has gone 3-4 in renewing its original summer dramas, renewing Haven for a third season earlier this month.  The show aired Friday nights in the coveted post-wrestling time slot, and averaged about 2.5 million viewers (including DVR viewers).

Only Eureka got the axe this summer, though it will return with a fifth and final season (already filmed) next summer.

This follows the network’s disastrous 2010 fall season, which saw the cancellation of two of its three dramas (Caprica and Stargate Universe) and a 40+ percent ratings plummet for the third when Sanctuary was moved off of Friday nights.

Does anyone think that the summer time might be better for Syfy’s off-Friday scheduling of original dramas?

The 13-episode third season of Haven will air in the summer of 2012.  The series is based on Stephen King’s novel The Colorado Kid, and stars Emily Rose as a former FBI agent who has become a cop in a small Maine town with (yep, you guessed it) big secrets.  Why is it that all small towns on television these days have “big secrets?”

Sanctuary is now airing on Fridays, back in its old time slot (the same hour Haven occupied over the summer).  The second season of Syfy’s adaptation of Being Human will be along in January, along with new-to-Syfy airings of the Canadian series Lost Girl.