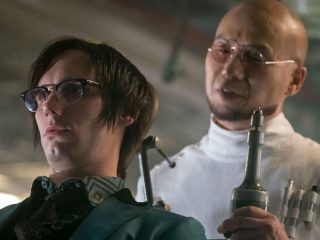 A military task force, led by Eduardo Dorrance is called in to provide relief to Gotham. Meanwhile, Nygma looks for answers from Penguin, who leads him back to Hugo Strange. (FOX)

A MILITARY TASK FORCE ARRIVES IN GOTHAM CITY ON AN ALL-NEW "GOTHAM" THURSDAY, JANUARY 31, ON FOX