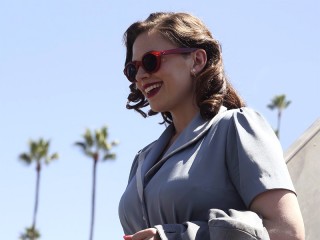 Written By:
Brant Englestein
Directed By:
Lawrence Trilling
Our Rating:

New Los Angeles division chief Sousa catches a bizarre case with a victim trapped in ice and Peggy Carter moves to California to help the investigation, leading to an energy research lab and a wealthy industrialist. Back in New York, Jack Thompson and the S.S.R. try to interrogate Dottie Underwood.

PEGGY HEADS TO HOLLYWOOD TO HELP INVESTIGATE A MYSTERY, ON THE SEASON PREMIERE OF "MARVEL'S AGENT CARTER" ON ABC

"Marvel's Agent Carter" returns for a second season of adventure and intrigue, starring Hayley Atwell in the titular role of the unstoppable agent for the SSR (Strategic Scientific Reserve), TUESDAY, JANUARY 19 (9:00-10:00 p.m. EST) on the ABC Television Network. Dedicated to the fight against new Atomic Age threats in the wake of World War II, Peggy must now journey from New York City to Los Angeles for her most dangerous assignment yet. But even as she discovers new friends, a new home - and perhaps even a new love - she's about to find out that the bright lights of the post-war Hollywood mask a more sinister threat to everyone she is sworn to protect.

In the season premiere episode, "The Lady in the Lake," Peggy moves to the City of Angels to help Chief Daniel Sousa at the West Coast Strategic Scientific Reserve (SSR) investigate a bizarre homicide involving an alleged killer and Isodyne Energy, and reunites with some familiar faces.