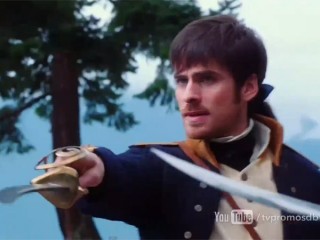 With last night’s episode of Once Upon A Time in the bag, ABC kicked off the week with new details on next Sunday’s outing in Neverland.

“Good Form” is the fifth episode of Season Three, and will give viewers a look into the past of everyone’s favorite pirate.

HOOK TAKES A DYING DAVID ON A JOURNEY TO FIND A MAP THAT COULD LEAD THEM OFF NEVERLAND, AND IN THE FAIRY TALE LAND OF THE PAST, HOOK AND HIS BROTHER SAIL TO AN UNCHARTED LAND TO FIND A POWERFUL HEALING PLANT, ON ABC’S “ONCE UPON A TIME”

“Good Form” – With the deadly Dreamshade coursing through David’s body and close to death, Hook takes him on one last journey to find a sextant that could help them decipher a map that would lead them off Neverland. Meanwhile, in the Fairy Tale Land that was, Killian Jones – aka Hook – and his brother, Captain Liam, sail off under orders of the King to find a powerful indigenous plant on an uncharted land that could help heal any injury.

The episode was written by Christine Boylan and Daniel T. Thomsen and directed by Jon Amiel.

Here’s the network’s on-air teaser for the episode: