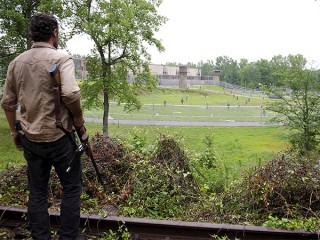 AMC’s zombie drama is back, and it’s back BIG. The third season premiere of The Walking Dead drew an astonishing 10.9 million viewers last Sunday.

In the Season Three opener Rick leads his people on a dangerous plan to infiltrate a walker-infested prison, which he hopes will give them a much-needed respite from their life on the run.

In total viewers the premiere was up a massive 50 percent from the Season Two premiere a year ago. It’s not only a record for the show and the network, but the most-watched dramatic telecast in basic cable history.

In the coveted demographic of adults ages 18 to 49, “Seed” was up 52 percent from last year to 7.3 million viewers. Deadline says that the ratings were higher even than any broadcast network series this season, excluding Sunday Night Football.

That’s 10.9 million not only without DVR-delayed viewers, but without viewers from Dish Network. AMC has been in the midst of a contract battle with the satellite provider, which has just been resolved — in time for tonight’s new episode of The Walking Dead.

Adding in repeat telecasts at 10 p.m. and 12 midnight, the premiere averaged a truly astonishing 15.2 million viewers.

The series airs Sundays at 9/8c on AMC. Keep up with Season Three with SciFi Stream’s The Walking Dead series guide!

What did you think of the premiere? Head over to the Episode Guide and post a comment!