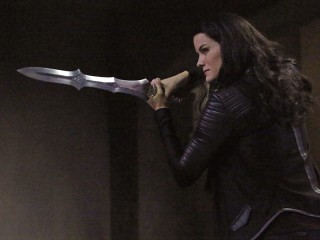 After Lady Sif turns up on Earth with her memory erased, Coulson and the team discover that she has been pursuing a Kree operative in Peru. Bobbi and Mac reach a decision that will have consequences for Hunter.

COULSON AND TEAM DISCOVER A LIFE-CHANGING SECRET AS LADY SIF RETURNS, ON "MARVEL'S AGENTS OF S.H.I.E.L.D." ON ABC

"Who You Really Are" - Coulson and team come to the aid of a confused Lady Sif, who has lost her memory after fighting with a mysterious warrior, whose true mission will send shockwaves through S.H.I.E.L.D. Meanwhile, Bobbi and Mac continue to hide their true mission from everyone close to them, on "Marvel's Agents of S.H.I.E.L.D.," TUESDAY, MARCH 10 (9:00-10:00 p.m., ET) on the ABC Television Network.