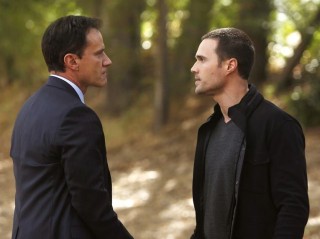 Written By:
D.J. Doyle
Directed By:
Milan Cheylov
Our Rating:

The team discovers Dr. Whitehall’s long history with Hydra, and Coulson leads a dangerous mission to secure a tool to locate the ancient city. While Bobbi interrogates Sunil Bakshi, Ward kidnaps his Senator brother to force him to admit his fault in a personal tragedy.

S.H.I.E.L.D. AND HYDRA RACE TO UNLOCK THE MYSTERY OF AN ANCIENT SECRET, ON "MARVEL'S AGENTS OF S.H.I.E.L.D." ON ABC

"The Things We Bury" - Coulson and team find themselves in an epic face-off against Hydra to uncover an ancient secret, while Ward kidnaps his brother, Senator Christian Ward, for a violent trip down memory lane, on "Marvel's Agents of S.H.I.E.L.D.," TUESDAY, NOVEMBER 18 (9:00-10:00 p.m., ET) on the ABC Television Network."