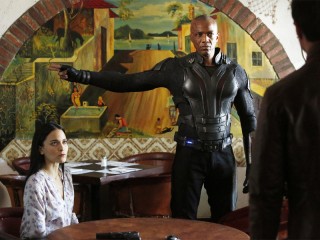 Written By:
Monica Owusu-Breen
Directed By:
Karen Gaviola
Our Rating:

Coulson forges an alliance with Grant Ward in order to get at one of Hydra’s top brass. Skye intervenes when she learns that Cal is being removed from the community, leading to a strange father-daughter trip to Milwaukee.

GRANT WARD MAY BE COULSON'S LAST HOPE, ON "MARVEL'S AGENTS OF S.H.I.E.L.D." ON ABC

"The Frenemy of My Enemy" - A dangerous new alliance is formed as Coulson and Hunter turn to the last person anyone would expect - Grant Ward! As the war between S.H.I.E.L.D. factions continues, Skye and Lincoln will find themselves drawn into this conflict, on "Marvel's Agents of S.H.I.E.L.D.," TUESDAY, APRIL 21 (9:00-10:00 p.m., ET) on the ABC Television Network.