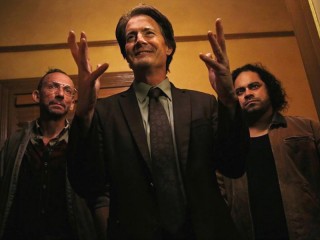 Written By:
Monica Owusu-Breen
Directed By:
Kevin Tancharoen
Our Rating:

While Skye is evaluated by Agent May’s psychiatrist ex-husband, Skye’s father assembles a team of super-powered criminals in order to lure Coulson into a trap.

"One of Us" - Cal seeks revenge on Coulson by assembling a team of Super Villains to destroy S.H.I.E.L.D. Meanwhile, May calls on renowned Dr. Andrew Garner (Blair Underwood), her charismatic ex-husband, with a crisis that threatens to tear the team apart, on "Marvel's Agents of S.H.I.E.L.D.," TUESDAY, MARCH 17 (9:00-10:00 p.m., ET) on the ABC Television Network.